Team building is a term that encompasses a wide range of activities that improve social relations between employees at a company. Companies usually organize team buildings at a remote location, so that employees get to mingle outside of the office environment. In most cases, employees are divided into several teams for the purposes of the team building. Each team has to complete certain tasks that involve the usage of their brains while behaving as a unit in order to resolve those tasks. Our company is one of the organizations that implement team building activities as a way to improve group development as a whole and employees’ personal skills as individuals. The main purpose of the team building is to involve employees in different activities and to make them feel appreciated as team members. That way, they would start building trust within the team while resolving the tasks at hand, even though they do not usually work together as a group at the office. Therefore, regardless of whether we work as software developers, digital marketing specialists, or virtual assistants, we all got to spend time together and improve our social relations.

Cosmic Development organizes annual team buildings for our employees thus enabling them to work on and improve their communication and social skills within the company. This year’s annual team building happened over the last weekend, from 15th to 17th November 2019 in Mavrovo – a skiing center in Macedonia, with a national park and lake. Mavrovo abounds with beautiful mountains, perfect scenic landscapes, and fresh air. Our employees were accommodated at Hotel Bistra, one of the hotels that are part of the Resort Mavrovo Recreation Department. It is the perfect location for team building activities and quality time spent with your coworkers.

Our employees from Toronto (Canada), Belgrade (Serbia), Skopje and Bitola (Macedonia), and Lome (Togo) came together in Mavrovo and got a chance to mingle with each other. They were divided into nine teams, each of which was carrying the name of one planet from our solar system. Therefore, we had the following nine teams: Mercury, Venus, Earth, Mars, Jupiter, Saturn, Uranus, Neptune, and Pluto. If you want to know how we spent the team-building weekend at Mavrovo and which activities kept us occupied, read about some of them below:

Mind games are mental exercises created for the purpose of improving the function of the brain. Moreover, mind games are included in team building activities with an intention to not only help team members identify problems within the team, but also to recognize the advantages and good qualities of each individual team member. These games also help team members come together as one entity and find solutions to various brain teasers and puzzles. Through critical thinking, problem-solving, and teamwork, team members can successfully resolve these mind games.

This year’s team building schedule included adventure games as part of the expected group activities. Adventure games are activities that challenge individuals to use both their minds and their strength at the same time. These games contributed to the personal enjoyment of each team member. Moreover, the activities made employees feel like they belong in a group of people and helped them establish new friendships. The adventure games, just like the mind games, were coordinated by people from the Resort Mavrovo Recreation Department whose main purpose was to provide us with a little excitement and help us create memories that will stay with us forever.

Adventure games are not extreme sports activities and do not require participants to be athletes or in great physical condition in order to participate. In other words, participants must be mentally prepared to participate in adventure games and to know how to use communication and organization skills. Therefore, these games can easily be called adventure recreation or adventure training games, because players need to only have the will to take part in a game which mandates the usage of both brains and speed at the same time. See the photos to get a better idea of what kind of adventure games our employees got to participate in.

After long hours of playing adventure games, the nine teams got on one of the many ski lifts of Mavrovo and took a hiking tour to the top of the mountain Bistra. As a nice finish to the hike, the employees had an organized lunch at the Old Goat House (“Staro Bachilo”) with traditional Macedonian food. The place offered traditional Macedonian cheese pie with sour milk as a side dish and different kinds of grilled meat. Our foreign colleagues got the chance to try the Macedonian cuisine and they loved it. Furthermore, the ambient of the Old Goat House contributed to the atmosphere, because it showed a display of different kinds of stuffed animals, and a display of animals’ heads, such as bears, goats, squirrels, deer, birds of prey, etc.

The final activity of the team building was called “Mavrovision” – a word comprised of “Mavrovo” and “Eurovision”. To those of you who do not live in Europe and do not know what Eurovision is, it is an annual international song contest with participants presenting European countries mainly. Similarly to this, we held Mavrovision – a karaoke song contest with participants representing the planets in our solar system. Each of the nine teams had to select a song of their choice and sing it in front of the other teams. In the end, the nine teams voted and selected the winner of Mavrovision by giving them from one to 12 points, following the example of the Eurovision’s voting system.

Apart from the karaoke song contest, Mavrovision consisted of another segment: recitation. Each team received a piece of paper with the lyrics of either a Serbian or a Bulgarian song. Team members had to recite the songs in a dramatic manner in front of everyone. This was especially interesting because our foreign colleagues tried to read the lyrics of the songs in Serbian or Bulgarian language, which is not common for them. The other eight teams also voted for the best recital and gave points to their competition, just like with the song contest.

All of these activities only contributed to getting our employees to feel closer to each other, regardless of the location where they work from. The team-building weekend spent away in Mavrovo helped us achieve a mutual feeling of comfortability and ease between ourselves, which is similar to that feeling of a family. And that is exactly what we are – a family! And now, although the team building is over, we are already looking forward to the next one in 2020. Till then, best regards from our Cosmic family in Mavrovo! 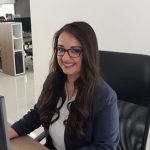 How to Scale your Business –Interview with Bookmark...

Cosmic Development, an International IT Outsourcing...

How to Train Your Adaptability Skills and Create Ne...